Maine’s rivers are big, and we followed two along US 2 – the Androscoggin and the Penobscot. They look placid now, in September, though clearly running deep and moving a lot of water. The fog had settled in over night, and we drove through it nearly to Bangor. When we broke through it felt like a perfect late summer day — green fields, blue sky. Leaves haven’t started to turn yet. We are entering logging country, and US 2 being only two-laned here, the Westy shudders when the big logging trucks tear by us.

At Bangor US 2 takes a sharp left turn to the north, and follows the Penobscot.We stop for a late breakfast along the river, off a very nice stretch of new paving, a condition we have been calling “New 2,” as there are several paving projects along our route. 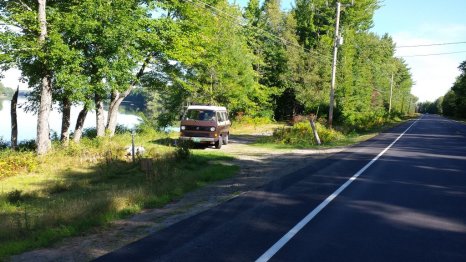 We had to stop again on this height of land, a cemetery with a great view of Mt. Katahdin in Baxter State Park directly west of us.

We are surprised to learn Rt 2 in Maine is home to an Amish country.

After giving up a couple more classic views of the Penobscot,

US 2 turns hard to the east, and Houton, Maine, a bustling border town, and then suddenly — to suddenly to even take a photo of the sign, the End of US2. And the border with Canada. 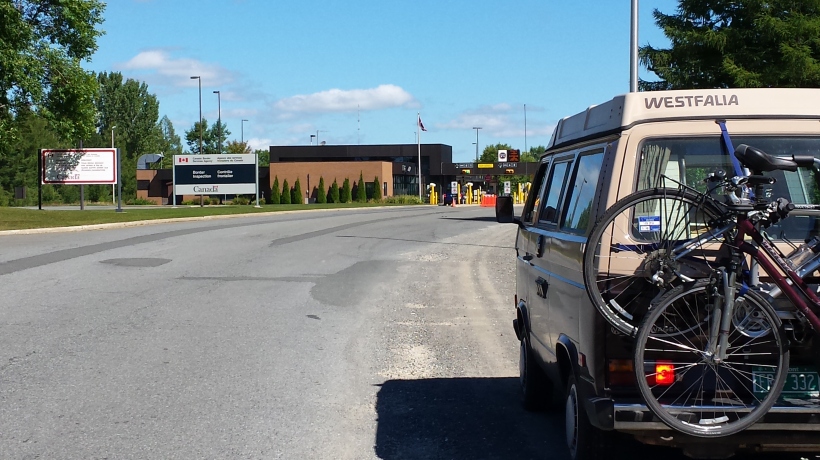 New Brunwick from Houton to Frederickton (the provincial capital) is scrubby land and scraggly trees. They aren’t great and grand enough to harvest, and nothing else seems to be happening here. No farms, fields, pastures, meadows. It is empty of people, agriculture, towns. We learn later, at the fine New Brunswick Museum in Saint John, that as much as 2/3 of the province isn’t arable. It looks like what you’d imagine a place looks like a 150 years after it has been clear cut, when the soil isn’t good enough for the forest to re-establish itself. We also learn later this is a result of geological hell breaking loose here, consecutively fracturing, folding, washing away, covering with ice, and then scraping away the land.

But then at Frederickton we join rivers again. And follow the NB River Route along the Saint John River. With each new tributary, the river seems to grow exponentially, until eventually it is like driving along a lake.

And with a river, better soil, and with better soil, people: farms, orchards, busy towns. And roads, and cars and again, trucks.

Finally, late in the afternoon, we crest one last hills and see the city of Saint John, and the river flowing into the Bay of Fundy.

Our campsite is well run campground on the edge of massive city park. Thank you, City of Saint John. We pop the top, set up the bed, and jump on our bikes to go into the city for dinner. Little do we know the reason there are no bike lanes and no other folks on bikes is that the city is built on several hills. It’s not a single slope to the Bay, as Burlington slopes to Lake Champlain, or flat like Boston. Saint John is more San Francisco-like, with hills leading to more hills. We exhaust ourselves wandering around downtown Saint John and steepest climb, of course, is back to the campground. It’s a lovely little city, though, with beautiful neighborhoods and stunning stone buildings all through the downtown. (More on this to come).

5 thoughts on “The US 2 East Adventure, Part II: Palmyra, Maine to the eastern end of US 2, at the border with New Brunswick”